Orient and Occident – and the cultural characteristics

Here and there, people live their lives in a way that is in harmony with the living conditions, customs, and traditions of society.

Most of the things we hold on to are those we loved in our childhood. As much as the world around us changes, as much the things we deal with change and as much the circumstances that determine our lives change, in the end, our heart clings to the objects of the past and our mind is occupied with the stories of our home country. To understand the people of a region, it is helpful to have a look at where they come from. There may be many traditions that we can easily live without and from which we move away in the course of our lives; however, these habits will never be forgotten, but remain deeply rooted in our innermost being.

Syria is a part of the traditionally Muslim-dominated Orient. The country has existed for more than 7,000 years. Situated at the great crossroads between East and West, Syria has historically been a trading partner for the whole world. Who does not know the famous Silk Road? Syria is also the region where the three world religions (Judaism, Christianity and Islam) are at home.

Germany is a part of the occident, Christian influenced and yet is a place for other religions as well. Similar to Syria in the past, Germany today is a global trading partner that has become an integral part of international trade relations. So, one would think that Germany and Syria have a similar background.

Rating on the scale of differences: Low (but at different times)

Syrians generally wear a combination of traditional Arab and Western clothing. Formal wear is rare, but as I am sure everyone would expect, most men and women cover their legs at least below the knees and their arms up to the elbows. This is partly for religious reasons and partly to protect them from the sun. However, it would be wrong to conclude that this affects the joy of life. Not only are young women full of vitality, but they also love bright colors, lots of jewelry, make-up and high-heels.

As for the Germans, I always thought that the latest trends determine their appearance. I was somewhat surprised to see how many of them, for example at the Oktoberfest, cling to the traditional costumes and folk traditions they inherited from their ancestors hundreds of years ago. If you live in Bavaria like I do, you notice immediately that Bavarians often wear traditional clothes, leather trousers for men and the Dirndl for women. However, when I first saw the carnival processions, I doubted whether this was really related to traditions or whether people in this country like to dress up in a funny way. There is no such thing in Syria.

Rating on the scale of differences: It’s a matter of taste (everyone should wear what they want)

Less funny is the topic of media. They should be an indicator of the progress and development of a country. The media in Syria is controlled by the government. Television is the most popular medium in Syria. Internet exists in Syria, but it is hard to believe that it works even worse than in Germany. To be honest, I am very disappointed with the internet in Germany. If you look at it, this medium cannot be an indicator of the progress and development of a country. As for the control of the media, I also read a lot about the fact that politicians from some European countries want to restrict the media more and more, just because they don’t like the opinions represented there. As a Syrian, I can only advise against this. Free and independent media are the most important instrument of democracy. Nobody has been able to explain to me why they want to abolish this freedom. I don’t think they know themselves. What this leads to can be seen in less democratic countries. Surely, they cannot be serious about wanting such conditions. You can be proud of your freedom of press and diversity.

Rating on the diversity scale: Very high (I like it better in Germany)

In Syria, the family is considered the most important social bond in life. The family regularly meets for parties, an occasion is always found easily or you simply meet without one. The family eats together, the children play with each other, while the adults sit together and talk all at once. We have more fun with each other than making fun of each other. Trips together are on the agenda all the time.

In Germany, I have noticed that family reunions often only take place at Christmas, Easter or around birthday. Most German families consist of parents with one or two children. In contrast, families in Syria have at least three or four children. The extended family in Syria also includes aunts, uncles, cousins, nieces and nephews, grandchildren and all the rest. Accordingly, a German family reunion does not bring together as many people as an extended Syrian family.

The grandparents often live together with their children and grandchildren in one apartment. In Germany this is less common, the children can hardly wait – at the latest by the age of 18 – to move out and stand on their own feet. I admire this independence. As a refugee, I found myself in a similar situation, but I miss my family very much.

Rating on the scale of differences: Large (but without any rating)

Syrian and German cuisine – a comparison

Syrian cuisine is characterized by its many delicious dishes, which are famous throughout the Arab world. However, the Syrian cuisine as such does not really exist but is a variety from the history of Syria and its regions. The most important ones are Damascus, Aleppo, Homs, Hama, the cities of the Syrian coast, the Syrian island region, Deir Ezzor, Raqqa, Badia and the mountain areas of Latakia, As-Suwayda and the landscape of Damascus. In this point, Syria is not different from Germany.

In Germany, the regions also have their own specialties and I find it difficult to define what constitutes German cuisine. But there is one difference. In Syria, it is usually the mother/wife who cooks. Here, the men also often cook or do something in the kitchen that is supposed to look like that. But often I was told by young women that they cannot cook. In Syria, this would be unthinkable.

With the migration of the Syrian population, of which Germany had the largest share in Europe, Syrian cuisine has spread worldwide in the last five years. Numerous new restaurants have opened in German cities where Syrian food is served.

Syrian cuisine includes a wide variety of foods, including Kebbeh, Taboulé, chickpeas, vine leaves, Fattoush, Lobna, Schawarma, Mjdara, Shankleesh, Makdous, and many other specialties. The list of desserts is almost endless. We Syrians have brought our passion for sweets from Syria to Germany, pass it on to the Germans and bring them a little bit closer to our homeland. One of the most famous sweets is the Halawa: small rolls of semolina filled with mild-sweet cream cheese, accompanied by a little rose water and ground pistachios. Not quite as sweet as the Turkish baklava which has been known here for a long time, but much better

When I arrived in Germany, I had a monotonous impression of German food, but this may be due to the food offered to us in the refugee accommodation. I do not want to be ungrateful, but it did not taste good, unfortunately. After about four years in this country and after extensive tours through various German cities, I have a completely different perspective. I discovered that my ignorance of German cuisine was the reason for my prejudice.

Rating on the scale of differences: Enormous (I like both)

Taxis, minibusses, and buses are the most widespread kinds of public transportation in Syria. Only one car exists per family, if at all, and not all of them work. Often a taxi ride ends with an endless argument between driver and passenger about the amount of the taxi fee. We Syrians are used to this.

What a different situation in Germany! A contrast like day and night. Here you can afford to discuss whether driving the most modern and newest diesel cars is still up to date. Public transport is available almost everywhere and even on time (in some cases). In Syria, people would probably give everything for such conditions, in Germany, they complain about it.

Compared to Syria, Germans ride their bicycles a lot, which I like obviously and I wish it would be a similar situation in Syria.

Rating on the scale of differences: Enormous 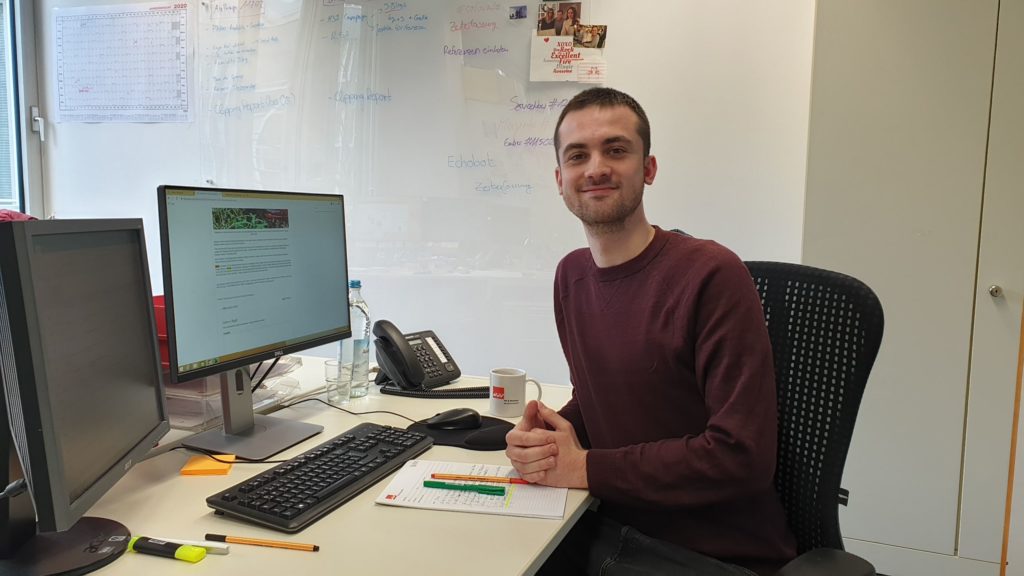 We thank Mohammad for his work at our place. We also learned a lot from him and wish him only the best for his future!

If you like to know more about Mo, read his introduction here.