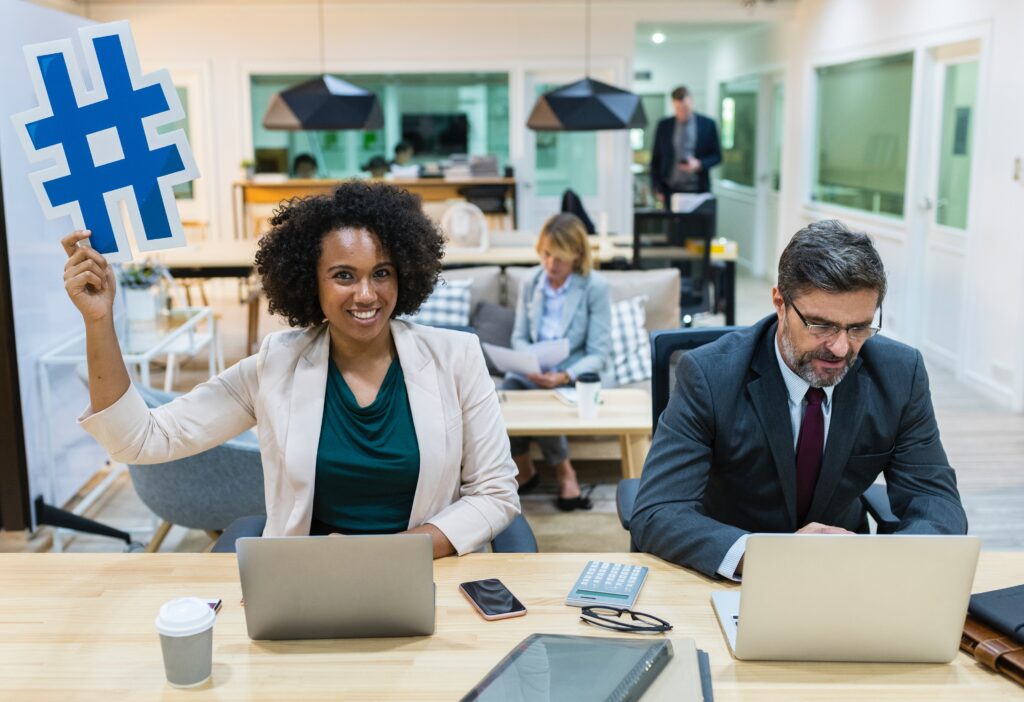 The next part of our Instagram series on the HBI blog is dedicated to hashtags (#). We often ask ourselves why we should use them at all and what the right number of hashtags is. It’s also about how to find relevant hashtags and where to place them.
But let’s start right from the beginning:

As well as on Twitter, hashtags on Instagram are words, letters or numbers placed with a hashtag (#) in front of them. All posts published with the same hashtags are categorized by Instagram. If a user clicks on the hashtag, all posts that also have used this hashtag will be shown. There is no distinction between video and photo. In general, all posts should be displayed with the relevant hashtag. However, the actual visibility is influenced by the Instagram algorithm, according to the frequency of the use of a hashtag or the popularity of a post. The goal of hashtags is to attract new followers and increase the reach. Users who come across new accounts via a hashtag probably share the same interests.

How many hashtags should be used?

There is no right and wrong. The more the better? Do more hashtags for a picture or video increase the attention from people? Up to 30 hashtags can be inserted per post. But how many hashtags are optimal? An issue of the magazine PR-Werkstatt on the topic “Instagram – Ein Leitfaden für die Profis” presented the results of a study by the software company TrackMaven from 2016. Although posts with eleven hashtags achieve the most interaction, ten to fifteen hashtags are still perceived as spam or annoying. However, due to different factors that influence the Instagram algorithm, the right number of hashtags to be used can constantly change. Nevertheless, hashtags are a good way of attracting attention and followers, especially for small accounts.

There are several options to place hashtags correctly. You can, for example, look at profiles of other users who have a similar style and interests. By doing that, the following points become evident: Which hashtags were used? Are there any similar hashtags which could also be suitable for your own Instagram profile? Especially by looking at famous accounts or influencers, the most common hashtags are quickly visible. If you are in a larger city or an “Instagram famous“ region, you can gain attention by using local hashtags. Most cities also have community hashtags. These can be found in Munich, Hamburg, Berlin or Cologne.

How do you use the hashtags effectively for yourself?

Once you have found the right hashtags for your photos and videos, storing them in a personal collection can be helpful. This collection can then be used regularly in posts. By adding further hashtags, a post can also be aligned. There are also Instagram-typical hashtags, such as #photooftheday #tbt or #instadaily. Even events and trade fairs now have their own hashtags. These should also be used to add your post to the Instagram collection.

Where should I place the hashtags?

For your own posts, you can place the hashtags either directly in the picture or video description, or in the first comment. But what is better? Again, the keyword here is the Instagram algorithm. Some time ago, a post appeared in the search results according to actuality and time of publication of the hashtags. So here it made sense to write the hashtags in the comments in order to bring the post into the current search results again. Meanwhile, only the time of the publication of the post is important now. It is visually more beautiful and looks more aesthetic if you only see the actual description under a picture or video without a lot of hashtags. However, every user can decide for himself where to place the hashtags.

Instagram Stories also have their own hashtag option. Here, you should choose the hashtags cleverly in order to get into the Hashtag Stories. With a little luck, you can reach a big audience since the chance to find your post in the Hashtag Stories is relatively high. You only have to keep in mind that not every hashtag is available in the stories. The stories for the respective hashtag can be found like normal hashtags and appear like the normal Instagram Stories avatar.

The correct use of hashtags on Instagram can help you to make your posts more visible and other users more aware of your profile. However, only the right hashtags alone don’t make a profile famous. A combination of different factors affects the visibility of posts and is therefore crucial for the reach of your account.

On this site, you will find everything about Instagram. What are the latest trends? How do I skillfully present my company? Which content do I offer to my target group? Advertising, influencers and much more.